The success of the first edition motivated ADEFA to programme a new meeting and that is how on June 16th 2000 started the second edition of the International Motor Show of Buenos Aires which, like the first and the following ones, would be developed by AMC Promociones that is also the traditional organizer of the Auto Show of Paris.

The Motor Show of the year 2000 widely exceeds the quantity of visitors reached in 1998 and set a new record of 201,601 visitors, that is to say, near a 20 % more than the previous event, and with two less days for public attendance.

These are figures which prove the important development of this second edition: gross area 38,720 sq m, 50% more than in 1998; occupied area: 26,054 sq m, the double of 1998; 1081 accredited journalists coming from 10 countries, with an increase of 60 % in relation to 1998; more than 10,000 visitors participated in the 4x4 vehiclesâ demonstration track.Â  A whole pavilion was dedicated to the classic automobiles: more than 32 brands, near 3,000 students from elementary and technical schools participated in the road education track and walked around the show room, amount that multiplied six times the one reached in 1998.

This second edition was presented in the pavilions from âLa Rural Predio Ferialâ, located in an important place of Capital Federal, which encouraged the visitorsâ access and movement. The media coverage of the Show was outstanding through numerous radio programmes, television and furthermore special supplements in the main newspapers of the country.

The advertisements of the event carried the slogan: âWe are waiting for you in the 2Âº Auto Show to surprise you with all the worldâs cars: the most modern ones, the oldest ones and the prototypes of the future cars which you always wanted to know. Discover a fabulous 4x4 circuit and a road education park so that the kids could also enjoy to the maximum. Come, you and your family will be surprisedâ. The public massively participated in the event and a direct contact between the user and the brands was created, in which both parts enjoyed to the maximum the exchange of vehiclesâ information and knowledge. 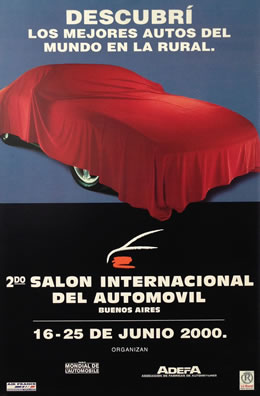